Aterian Plc (LSE: ATN), the critical and strategic metal-focused exploration and development company, is pleased to announce the discovery of sediment-hosted copper mineralisation at the Company’s recently acquired Tata Project (the “Project“). The Project, which covers an area of 143 km2, is located within the western Anti-Atlas Mountains of the Kingdom of Morocco (“Morocco“) and lies 30 km south of the Company’s Azrar copper-silver project.

·      Stratiform sediment-hosted copper mineralisation identified within Adoudounian sediments occurring on the flanks of a Proterozoic inlier.

·      2.05 % Cu reported from a dolomite float sample located adjacent to the contact between Adoudounian sediments and the Proterozoic inlier.

·      The Project hosts a mapped historical copper-gold and gold occurrence.

·      The Project is located 50 km southeast of the Tizert copper mine (mineralisation hosted at Tizert is not necessarily indicative of mineralisation at Tata).

“We are very pleased by the highly encouraging results and geological data from our recently acquired Tata Project in Morocco. As we feel it offers significant value potential to the Company and its shareholders, we consider the Tata Project is one of our higher-priority projects.

“The Project was recently acquired as part of the Company’s acquisition of Aterian Resources Limited, which holds a portfolio of 15 highly prospective copper, silver and base metal projects. We look forward to pressing ahead with the exploration of this Project and the other assets within our Moroccan portfolio, which we believe demonstrate significant upside. I look forward to updating shareholders with the results from these programmes in due course.”

“The initial results indicate the presence of sediment-hosted copper mineralisation, which is very exciting given we still have a significant strike length of over 25 km to explore and sample. Our internal review of the sedimentary copper found in the western Anti-Atlas indicates that it typically occurs within the Basal Series and Lower Limestone units of the Adoudou Formation. These initial results correlate stratigraphically with this observation made on other nearby copper occurrences, however, copper mineralisation has also been reported from the younger, overlying sediments of the Cambrian-aged, Tata Group. We will continue to evaluate the unexplored areas of this Project, working towards establishing a drill programme.”

The Tata Project covers an area of 143 km2 and is comprised of nine licence blocks situated in the western Anti-Atlas Mountains, 30 km south of the Company’s Azrar copper-silver project. The Project is located approximately 465 km south of the capital Rabat, 165 km southeast of the port city of Agadir, and 50 km southeast of the Tizert copper mine which is operated by Managem. Late Ediacaran to early Cambrian Adoudounian sediments occur within the Project along the margins of the Proterozoic Tagragra de Tata Inlier.

The western Anti-Atlas is dominated by Palaeoproterozoic to Neoproterozoic age inliers overlain unconformably by Cambrian to recent sedimentary sequences and volcanic units. The late Ediacaran to early Cambrian-aged Adoudou Formation is comprised of sediments known to host major sedimentary copper deposits in the Western and Central Anti-Atlas that include the Tizert mine (with resources estimated to be 57 Mt grading 1.03 % Cu and 23 g/t Ag).

Exploration work on the Project has identified copper mineralisation hosted within late Ediacaran to early Cambrian age Adoudounian sediments and also within the lower limestone and dolomitic units of the overlying Tata Project, occurring along the flanks of the Proterozoic Tagragra de Tata Inlier. The results indicate the presence of stratiform sedimentary copper at the Project with an unexplored strike length of c. 16 km remaining untested along the northern flank of the inlier and a further c. 9.5 km of strike along the southern margin of the same inlier. Published historical geological maps (2002) indicate anomalous copper and gold were identified 6km along strike from samples reported in this announcement along the northern margin of the inlier (although the grades from the historical samples are not available).

A total of 27 samples (25 rock chips and 2 float samples*) were collected during this reported sampling campaign. Of these samples, 14 samples (52 % of this batch) were > 0.3 % Cu, and 3 (or 12 % of the batch) were greater than 1 % Cu. The maximum sample returned reported 2.05 % Cu from an Adoudounian age dolomitic float sample collected below the contact between the basement inlier and the overlying sediments. Other results include 0.95 % Cu reporting from a 4 m thick dolomitic sequence and 0.87 % Cu from an 8 m thick sequence of dolomite and marl. Two further samples collected from units within the basement inlier also reported anomalous copper, with one sample containing 1.44 % Cu within a brecciated metasediment and the other sample returning 1.04 % Cu from a quartz vein float sample.

*A rock chip or grab sample cannot be taken as a representation of the overage grade average and potential deposit size.

Work Plan for the Tata Project

Future work will include traversing and sampling along the c. 25 km strike length of unexplored sediments, supported by more detailed stratigraphic mapping and sampling at selected locations perpendicular to the strike of the bedding, and focusing on areas identified to host large-scale cross-cutting structures.

All sample preparation and analysis from these reported samples were undertaken by ALS Limited, an accredited laboratory in Sevilla, Spain. Given the early-stage nature of these programmes, no QA/QC samples were included.

Illustrations
The following figures have been prepared by Aterian and relate to the disclosures in this announcement.

The technical disclosure in this regulatory announcement has been approved by Simon Rollason, Chief Executive Officer of Aterian Plc. A graduate of the University of the Witwatersrand in Geology (Hons). He is a Member of the Institute of Materials, Minerals and Mining, with over 30 years of experience in mineral exploration and mining.

This announcement contains information which, prior to its disclosure, was inside information as stipulated under Regulation 11 of the Market Abuse (Amendment) (EU Exit) Regulations 2019/310 (as amended).

Aterian plc is an exploration and development company with a diversified portfolio in Africa of critical and strategic metals projects.
Aterian plc is actively seeking to acquire and develop new critical and strategic metal resources to strengthen its existing asset base, whilst supporting ethical and sustainable supply chains. The supply of these metals is vital for the development of the renewable energy, automotive and electronic manufacturing sectors that are playing an increasing role in reducing carbon emissions and meeting climate ambitions globally.

The Company currently has three joint ventures in Rwanda where it is exploring and developing small-scale tantalum-niobium-tin mining operations and recently acquired Aterian Resources Limited, a wholly owned and battery metals-focused subsidiary of Elemental Altus Royalties Corp (formerly Altus Strategies plc). Aterian owns a portfolio of 15 copper-silver and base metal projects with a project area of 762 km2 in the Kingdom of Morocco.

The Company’s strategy is to seek new exploration and production opportunities across the African continent and to develop new sources of strategic and critical mineral assets for exploration, development, and trading.

Geological Setting of the Tata Project

The western Anti-Atlas is dominated by Palaeoproterozoic to Neoproterozoic age inliers overlain unconformably by Cambrian to recent sedimentary sequences and volcanic units. The transitional late Ediacaran/early Cambrian Adoudou Formation is comprised of sediments known to host major sedimentary copper deposits in the Western and Central Anti-Atlas that include the Tizert mine (with resources estimated to be 57 Mt grading 1.03 % Cu and 23 g/t Ag). The Tata Project hosts Proterozoic formations, within the Tagragra de Tata Inlier, described as a sequence of tuffaceous silty shales and mica-schists. These basement rocks are deformed by an ESE-WNW striking foliation. In addition, these formations are intruded by dolerite dykes generally oriented east to west. The Proterozoic sequences have been intruded by a granitic complex and complexly deformed during successive Eburnean, Pan-African and Hercynian orogenies. 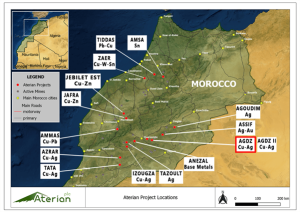 Aterian Plc (LSE: ATN), the critical and strategic metal-focused exploration and development company, is pleased to announce the discovery of sediment-hosted copper mineralisation at the Company’s recently 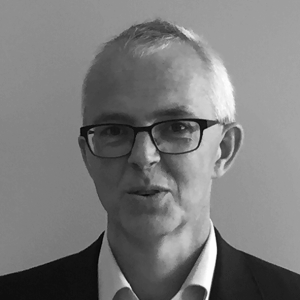 Aterian Plc (LSE: ATN), the critical and strategic metal-focused exploration and development company, is pleased to announce the appointment of Mr. Graham Duncan to the 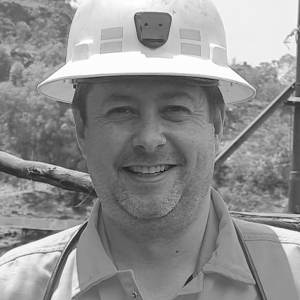 Aterian Plc (LSE: ATN), the critical and strategic metal-focused exploration and development company, is pleased to announce the appointment of Mr. Luke Rogers to the

Total Voting Rights In accordance with the FCA’s Disclosure Guidance and Transparency Rules, as at 31 October 2022, the Company’s issued share capital consists of

Aterian plc (LSE: ATN) is an LSE-listed company pursuing the exploration and development of African critical and strategic metal assets.

And just like that day 2 of #MI23 closes! As the annual meeting place for industry decision-makers, we hope your time spent with us yields new connections, enhanced deal-making, and thought-provoking discussions for 2023 and beyond.

See you all tomorrow for day three!

Aterian plc is an investment company listed on the London Stock Exchange acquiring and developing critical and strategic mineral resources.